Boldness for the Lord 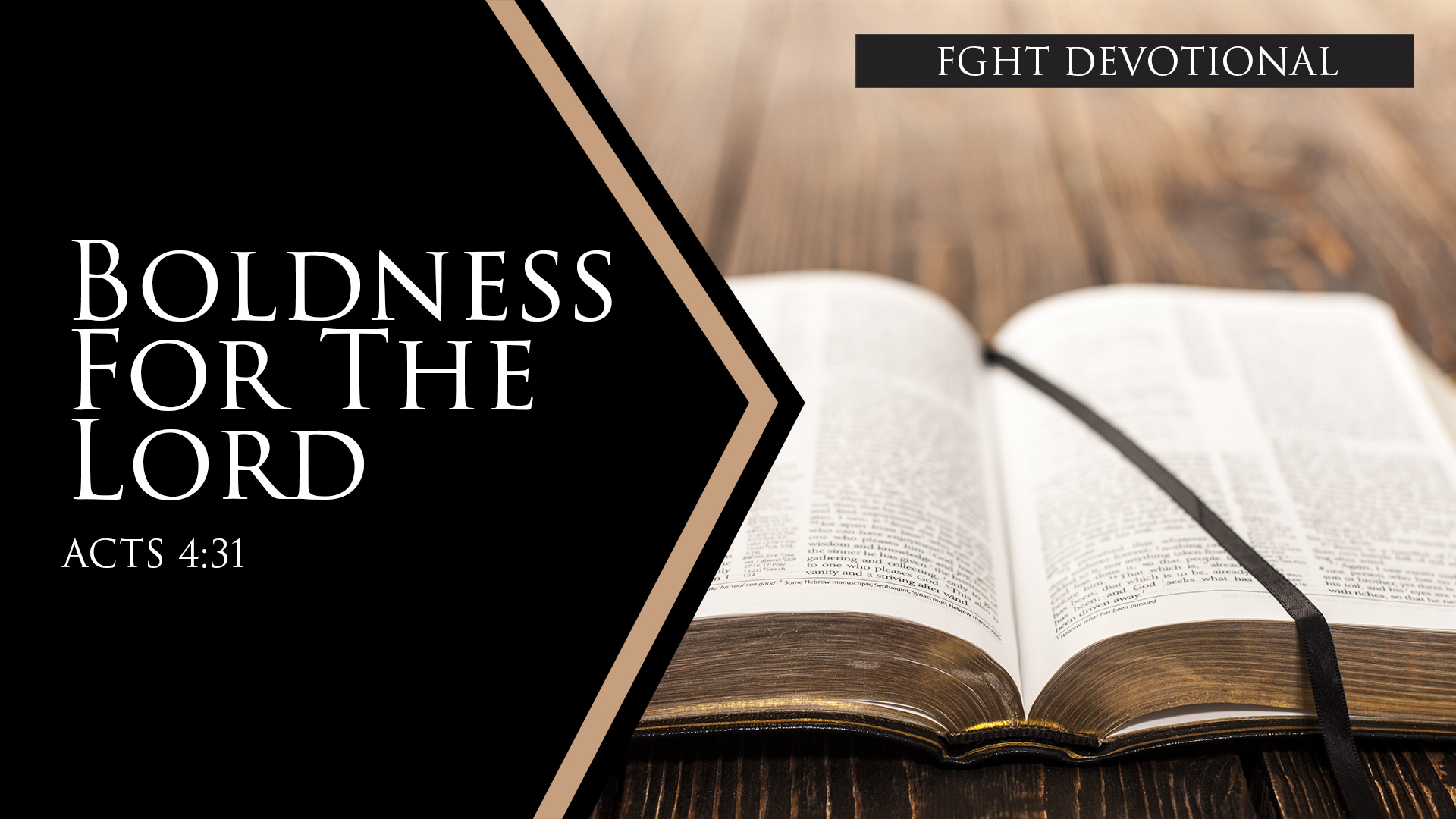 And when they had prayed, the place was shaken where they were assembled together; and they were all filled with the Holy Ghost, and they spake the word of God with boldness. Acts 4:31

Have you ever found yourself afraid of something or someone, and then not act with enough courage to say what needed to be said? Have you ever found yourself asking God for more boldness? Boldness is the opposite of fearfulness, a natural entity, but if boldness is needed, it is not wrong to ask God to increase it. Sometimes it is required to move from one point to another.

Boldness is described as not hesitating or being fearful when confronted with a threat or danger. It is a willingness to get things done despite possibilities. While it can enhance or highlight something or someone, it can lower the profile of something or someone. Some people practice boldness to show themselves fearlessly, while others use it to make others fearful. It is praiseworthy when used to build up or to motivate and encourage. On the other hand, it is blameworthy when it tears down.

There is a saying, “boldness is the essence of a lion.” Lions represent strength and courage, and their character commonly symbolizes majesty and royalty. They demonstrate a fearlessness that demands respect. With their robust power and resilient fierceness, they display such bravery and self-confidence that they are never hasty. Have you ever seen such boldness revealed in a person? Two Bible characters demonstrated these characteristics.

Apostle Paul, (Saul before he was converted), was bold in his intent to harm the Lord’s servants. He made havoc of the church, took part in persecution, and consented to murder (Acts 8:3). He was very bold in committing evil acts. However, once he was converted, he was equally bold for the Lord. Although he endured threats, he continued to speak boldly in the name of Jesus. He stood firm and was proud regarding the true gospel of Jesus Christ and exercised the courage to make it known. He celebrated the Lord with Holy boldness. No matter his daily circumstances, even being locked in prison, he never failed to declare the gospel with all confidence. His courage gained him the credentials of being one of the most essentials figures of the Apostolic age. His actions of boldness spoke out loudly and clearly. When it came to the work of the Lord, this man of courage was fearless.

Another Bible figure who exemplified boldness for God had a lionlike spirit. He dared to kill a lion, a bear, and the giant who defied God’s army. David, in his youth, was authentic and demonstrated boldness when he faced the giant Goliath. He could have had some fear within himself, but through God, he was made strong, courageous, and waxed valiant in flight (Hebrews 11:34). David took the challenge of making himself vulnerable to the giant, going beyond the usual limits of a warrior in battle. He demonstrated no concern about the giant’s appearance or his threatening language. Although small in stature, David’s confidence was untouchable in God. Regardless of what his eyes beheld and his ears heard, he dared to go up against Goliath with a sling and a stone. Instead of running from the giant, he ran to him and met him face-to-face. Though the giant was much older and extremely experienced, this small ruddy youth killed him and afterward used the giant’s sword to cut off his head. Like Apostle Paul, this young soldier of God was fearless! These are just two of many ordinary people in the Bible who employed boldness to accomplish extraordinary victories.

Boldness can be challenging yet necessary in many situations. We all need it at one time or another, although for some it comes effortlessly. Boldness can be powerful when utilized for the glory of God. However, it is not to be put on display, for self-exaltation, or to victimize others. We can be as bold as Apostle Paul or David. Let us choose to be courageous for the Lord. Instead of being fearful, let us pray and ask God for more boldness to speak in His name (Acts 4:31).

Prayer is Key: Dear Lord, I ask that You grant me the boldness to do what is expected of me. Help me to be unafraid when it is time to speak for You. I ask that you help me to build confidence in myself, and above all, build more confidence in You, so that I might bravely complete the work that You have for me to do. In the name of Jesus Christ of Nazareth, I pray, Amen.