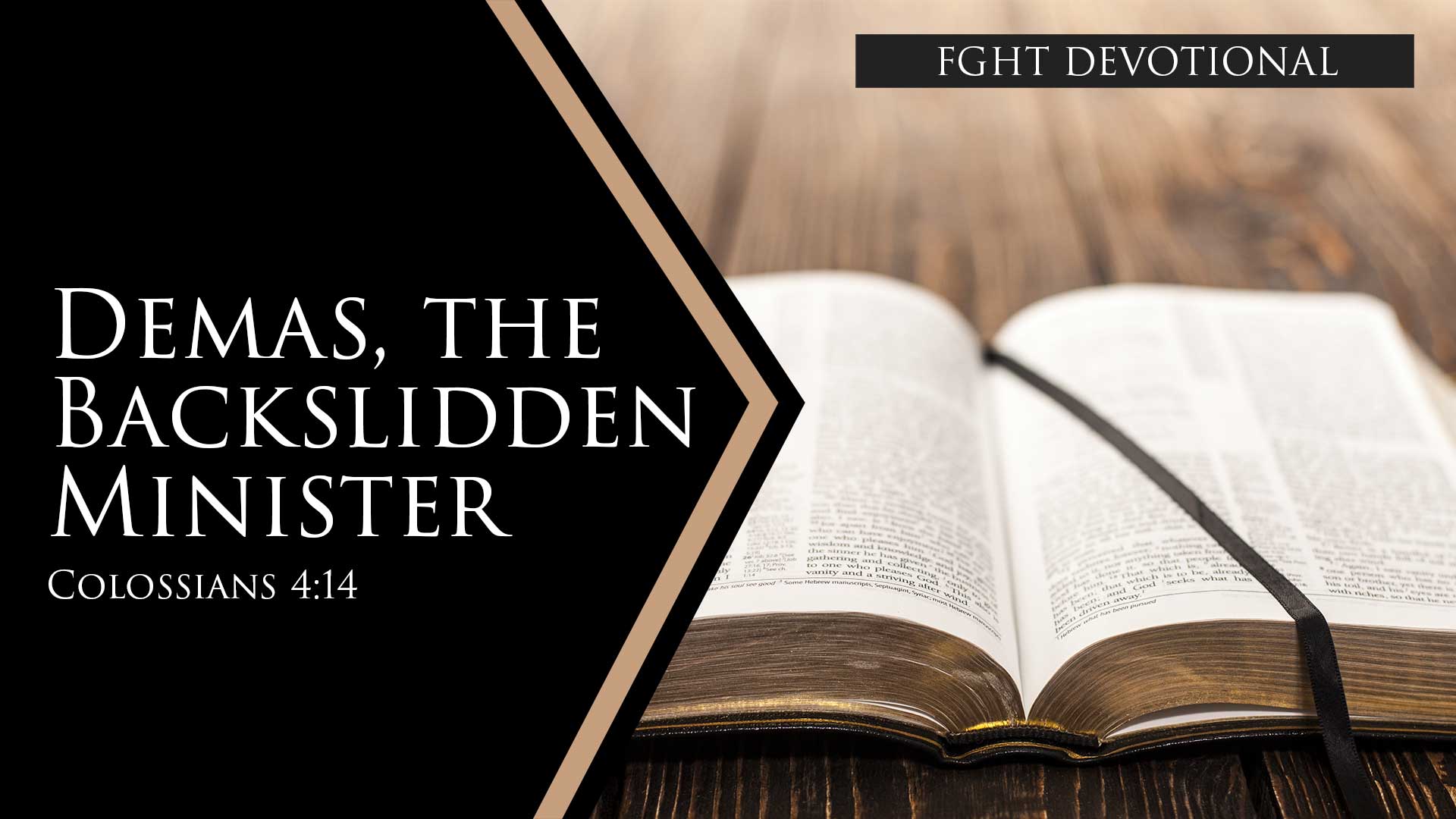 In the small book of Philemon, chapter 1, Apostle Paul sent greetings to Philemon and mentioned his fellow laborers in Christ. Demas was listed among them.

So, right along with Mark, Luke, and Aristarchus, Demas was a vital fellow laborer with Apostle Paul. He was right there with Paul during his first imprisonment in Rome, according to Col. 4:14.

14 Luke, the beloved physician, and Demas, greet you.  Unfortunately, however, in the 4th chapter of his second letter to Timothy, Paul sent a sad report about Demas when he said: 10 For Demas hath forsaken me, having loved this present world,

Demas, a minister who was once saved, forsook God and Paul and went back into the world. He valued the things of Satan more than the things of God and backslid. In so doing, he also shattered the “Once saved, always saved” doctrine. He blew it out of the water. Dake’s commentary statement says this about Demas:

It is conceivable that God will take people to heaven who do not love Him? If this man did love God at one time, which is clear from Ph’m 24, then how did he become separated from the love of God (Romans 8:35-39)?

Was God responsible for his loving this present world and forsaking Paul? If not, who was? This proves free moral agency after conversion. If we have free choice powers, then we alone can choose to backslide and fail God. We thus choose our own destiny after salvation as we do before salvation. Not one scripture ever suggests that God forces any man to serve Him.  (Taken from Dake’s – 2Timothy 4:10 b pg. 421).

Dakes’s Commentary and other scriptures make it very clear that while it is true that Satan cannot pluck you out of the hand of God, (John 10:28 And I give unto them eternal life; and they shall never perish, neither shall any man pluck them out of my hand)  you may very well jump out of his hand or walk away from Him as Demas did.  The choice is yours. If you want out, you can get out.  But the individual who backslides and leaves God forfeits a right to the Kingdom of God.

If the Bible tells us that the righteous will scarcely make it in, where do you think the unrighteous will wind up? 1 Peter 4:18-19 says:

18 And if the righteous scarcely be saved, where shall the ungodly and the sinner appear?

19 Wherefore let them that suffer according to the will of God commit the keeping of their souls to him in well doing, as unto a faithful Creator.

Nowhere are we told in the Scriptures that Demas was restored to a right relationship with Jesus Christ. He had his hand in God’s hand, but he chose to take it out. 1).  He was once saved; 2). he decided to walk away; 3). then he was no longer saved.

Demas and his actions clearly disproved the doctrine of “Once saved, always saved”, or eternal security.  Once you get saved, just stay with God. Live a clean and holy life so that you too may make it into the Kingdom of Heaven. We must all fight until the end to see God’s face in peace.